The Lagos State All Progressive Congress APC Goververnorship aspirant, Babajide Sanwo-Olu as part of his plans for the state revealed how he will improve the tourism and entertainment sector of the state.

Babajide Sanwo-Olu noted that Lagos State host some of the biggest shows and events every year which is an avenue to bring in more tourists to the state.

The APC Governorship aspirant noted that his government would restore cultural sites and do some rebranding to festivals in the state so as to make them match up with international festival.

To achieve this, Babajide Sanwo-Olu disclosed that his Givernment would create better contents and provide security to ensure that tourists and the people of Lagos State are secured.

He also noted that he would work with the Nollywood industry to create infrastructure and also encourage creativity in schools.

Below is a statement released by Babajide Sanwo-Olu via his Twitter handle,

He wrote, “Obago in Phynofino’s voice.That’s how I feel about our plans for Entertainment & Tourism. We host some of the biggest shows & events in Africa every year, & working with the entertainers & bodies, we want to create avenues to bring more tourists to Lagos.

We will restore a lot of cultural sites in the state, rebrand a lot of existing festivals to international standards with better content & security. We will also work with the film industry to upgrade infrastructure & support creativity in our schools.
Some of the elebrities that met with Babajide Sanwo-Olu include King Sunny Ade, D’banj, Phyno from the music industry, the likes of Jide Kosoko, Yinka Quadri, Adebayo Salami among others from Nollywood. 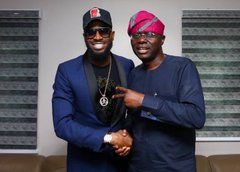 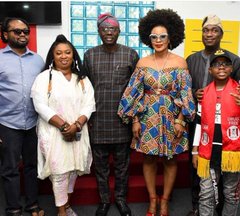 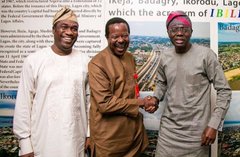 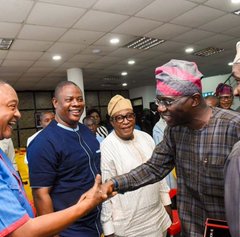 Festus Keyamo to APC supporters ‘don’t taunt those who lost’

Another Building Collapses In Lagos Leaving Many Trapped