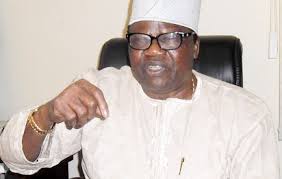 The APC chieftain and Former Minister of Information, Tony Momoh once told Nigerian to stone them if Buhari’s administration doesn’t deliver on his campaign promise.

According to Punch in a phone interview with him yesterday, he said that he knows that Nigeria still has a lot of challenges but Buhari has acquitted himself as an exemplary leader.  He condemned people who say the Buhari-led administration saying that they are not making their claims based on facts but on perception.

Here are the things he stated Buhari has done for the country in an interview with him;

“President Buhari has done well based on the facts available and not sentiments. He has done well in the delivery of his campaign promises despite the big problems he met on ground. For example, let us look at the area of security before Buhari came in, the Boko Haram insurgents was operating almost uninhibited, to the extent of seizing territories. But for Buhari’s intervention, Only God knows what would have happened to the country because of Boko Haram. Also, while some other countries are still wriggling under recession caused by a crash in commodity prices, the country is out and is even doing well in the area of diversification. Even the World Bank has just predicted that the country’s GDP will further grow in 2018, there are also monumental gains in the fight against corruption. I reviewed a book recently on the scorecard of the president and I was pleasantly surprised by some of the revelations about Buhari’s performance. Those who do not know, should go and check the facts, Buhari has done well as president,”

Atiku Abubakar To Return To Nigeria Today Ahead Of Presidential Debate

Nigeria has recorded an additional 182 new cases of COVID-19 in the last 24 hours. Fro the cases reported by