– Senate Pres., Bukola Saraki has reacted to the incident

According to a report, many school pupils are fear dead and some are still trapped in a school building that collapsed at Ita Faji, Lagos Island, Lagos State on Wednesday.

The report made it known that the school is within a three-storeyed building.

A report made it known that emergency workers are currently present at the scene of the incident.

In a reaction to the incident, Senate Pres., Bukola Saraki has sent his heartfelt prayers to the families affected by the building collapse.

The Senate Pres. also prayed for safe rescue of school pupils still trapped in the building.

Learn Also: Lauretta Onochie slams Walter Onnoghen tells him to take his pill and appear before the CCT

Bukola Saraki in a statement via his Twittee handle wrote, “My heartfelt prayers are with all the families affected by today’s building collapse in the Ita-Faaji area of Lagos Island, particularly the young school children who are reportedly trapped inside. I pray for their safe rescue.”.

The sad incident has raised question on Twitter as Nigerians asked about contractors, who build such buildings.

Its a sad day in Lagos, as innocent pupils lose their lives to a building collapse at ita faji, Lagos island, condolences to parents who might have lost their kids to this event. This event should raise serious questions concerning the state of buildings on the Lagos island??
@Israel Ugochukwu Journalist:
And anytime a disaster happens, people will just turn the place into a viewing center. They are not there to help, just stand-dey-look, obstructing rescue workers. While there are genuine sympathisers, many are just there. Some even go to Lagos Island to possibly steal something
Below are some pictures from the scene 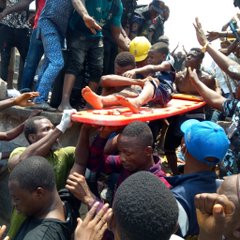 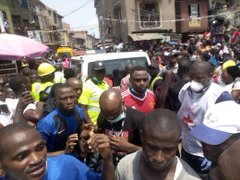 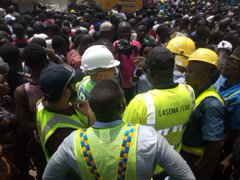 Yakubu Dogara Fires At Asiwaju Tinubu, Accuses Him Of Autocracy

The epicenter of the coronavirus in Nigeria; Lagos has recorded ten new cases; which take the case in the state