– The invitation comes amidst the EFCC probe on Bukola Saraki

According to the reports, Pres. Muhammadu Buhari invited the leaders in the Law making arm of the country yesterday to join him at the Presidential Villa in the breaking of the Ramadan Fast with him.

This comes after the Pres. had hosted his cabinet on Monday.

The invitation was confirmed by the spokesperson to Pres. Muhammadu Buhari on Media and New, Garba Shehu on Twitter.

He wrote, “President Muhammadu Buhari host leadership of the National Assembly to break #Ramadan fast this evening at the State House, Abuja.”

The Nigerian leaders also took pictures during and after the meal.

However, the President invites to Sen. Pres. Bukola Saraki comes amidst his probe with the Economic and Financial Crimes Commission EFCC.

A few days ago the EFCC made it know that it will probe Bukola Saraki’s tenure as Governor of Kwara state.

A report made claims that some of his properties have already been place under locked.

Moreover, Sen. Bukola Saraki will be handing over as the Senate President in less than three weeks when the 9th Assembly will commence seating.

Read Also: Femi Fani Kayode slams FG for calling for a reduction in number of Nigerians given visas

The Senate President was unable to win his return ticket during the 2019 Presidential and National Assembly Election from his Senatorial Ward in Kwara state following the ‘Otoge Movement that went viral in the state.

Bukola Saraki is also one of the key supporters of former vice pres., Atiku Abubakar, who contested against Pres. Muhammadu Buhari during the general elections.

Although Pres. Bihari was declared as the winner, the PDP and Atiku are currently seeking redress at the tribunal.

Below are some of the pictures 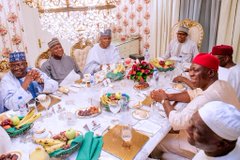 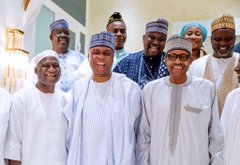 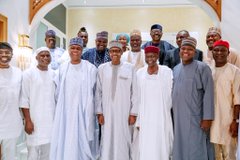 Twitter Erupts As El-Rufai Vows To Block Peter Obi From Aso Rock, In 2019